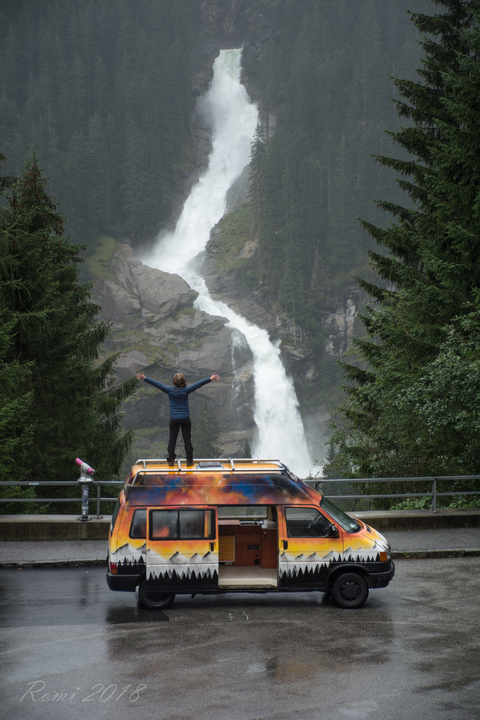 Camper van jerry in Austria
We Set off with Jerry from the bus station in Ljubljana in a torrential downpour on the wrong side of the road (for us South Africans, anyway). Not really knowing where we were going, we just headed in the direction of Bohinj. Starting off on the highway made it easy, but soon we ended up on the windy, narrow roads of Slovenia (a bit of a hair raising experience that we didn't quite get used to). We passed Lake Bled and being as beautiful as it was, I decided to open my window to take some photos (bearing in mind it was pouring with rain). Needless to say, my window was not hugely convinced it felt like closing again and we continued to our destination getting slightly wet! No worries, on arrival with a bit of elbow grease we closed the window and found our spot to park Jerry. At this point the rain had not subsided and we were'Jerry bound'. After a pretty average start to our trip, we were both concerned by our decisions on travel choices.. But we were so wrong - what a journey it ended up being!
The following day we explored a few of the waterfalls and the beautiful turquoise lakes and carried on our travels up a very steep mountain pass, and slept under the stars on top of the mountain for the night. There is something very tranquil about an open fire, a camper van and a sky full of stars. After a night of Lasko beer and many rounds of cards, we awoke to a very warm morning and decided to head to Bovec to experience the Soca River and all its beauty. A photographers paradise. We went waterfall hunting, including the beautiful Slap Kozjak and Slap Virje (A must see when travelling Slovenia).
Slap Virje Slovenia
Triglav national park with Balkan Campers
Triglav national park
After a few days of hiking and exploring, we decided to head for the Triglav National park where we drove over a very steep and windy but exceptionally beautiful pass and down the other side where we entered into Austria. After 33 hair pin bends on the way up and about the same on the way back down, we decided that Jerry probably needed a break for the day and we settled for the night in the little picturesque town of Hallstatt. We spent another night under the stars and then woke up at the crack of dawn to beat the many other tourists to the picture perfect locations that Hallstatt has to offer. After a few hundred photos had been snapped , we headed up with a cable car and a very steep hike to visit the Ice Caves in Hallstatt. Albeit freezing, it was well worth the sight. 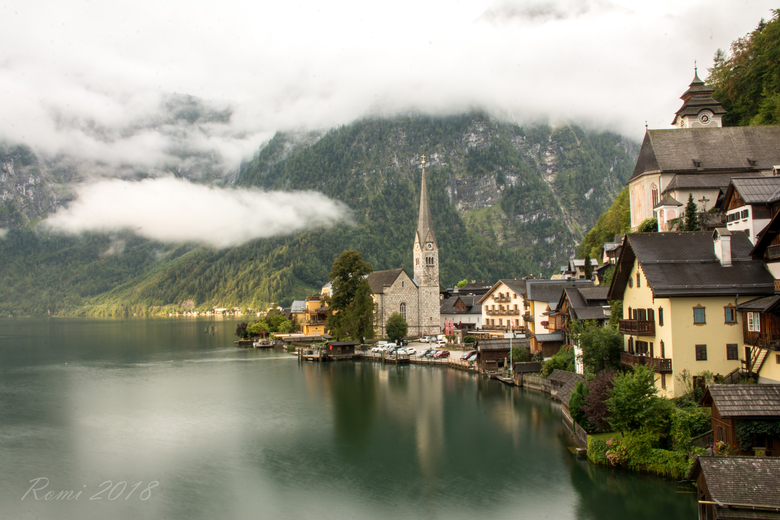 Hallstadt Austria
We carried on our venture off the beaten track to Zell Am See and a few other remote places in Austria and ended up in Krimml, a small town only known because of having the tallest waterfall in Europe located there. With 12000L of water falling every second, you get soaked in seconds standing beneath it.The power is unreal. From there we wanted to carry on our trend of driving up steep mountain passes and headed for the Grossglockner alpine road, which is the highest pass in Austria, only to find out that it costs 36 EUROS per vehicle. This caused us to backtrack quickly as money was tight, so we decided to leave Austria and head into Italy to go and explore the Dolomites.
Well were we in for a treat. We stumbled into Toblacher See Camp site, which was located in the most amazing setting. Although rather pricey, we decided it was worth the money for the location and we settled there for the night. The next morning, we headed for Mount Marmolada, the tallest peak in the Dolomites. After yet another very steep and windy incline, exhausted Jerry got us to the top  of the mountain pass, where we slept below the Marmolada peak for the night. It was icy cold that night, but we found out why when we headed up 3 cable cars the next morning to get to 3250m high and found a snow covered glacier at the top. After taking in the breath taking views and a couple of snow ball fights at the top, we descended to the second cable car stop and headed along the mountain to explore. We found a path leading to some old World War 1 bunkers dug into the side of the peak with narrow paths leading between them. We followed the path which took us up a rather hair raising climb, with the use of staples and cables, we landed on top of a very small peak with views to die for. What a thrilling yet truly terrifying experience. I had made it to the top, but I was not convinced about heading back down! With the help of the enthusiastic encouragement of fellow climbers and my "mountain goat" of a partner, we took a slow and steady climb back down. I made it! Feeling very shaky from the adrenaline wearing off, we headed back to ground level and carried on our journey to Charlotte's riding school, where our trusty steeds, 'Niels and Stripes' were waiting patiently. From a cable car to horse back. As I am an experienced rider and Dylan is not, he received a short lesson on how to control the horse and hold on. Off we went, flat out up the side of a mountain. Who said inexperienced riders can't gallop. What a day. We found a place to camp under the stars for the night and went to sleep, as the next day we had a long drive back to Slovenia. This time we were heading to the Logar Valley to explore a bit more of Slovenia before spending the night near some epic caves that we got to explore. The next day we headed back to Ljubljana to return Jerry after an amazing two weeks, to carry on our journey in Scotland.
logar valley Balkan Campers
What an experience it was and hopefully we can return one day to travel the Balkans and the rest of Europe.
Travelling in a camper van gave us many reasons to explore and see things every day that I feel we would not have done if we were in a hotel or B&B and it gave us so much freedom. So after a bumpy start it was a sad goodbye as we handed in the keys and climbed on our train to our next part of the Journey.
Thanks Balkan Campers for a trip of a life time.

Jack and Dani in South Croatia!

Croatian coast is amazing. Especially in May ,June and September. Check out the story of Jack and Dani.

They traveled the world but there is no place like Croatian coast! Check out the story of Jernej and Ana going to Goulash disko festival!

Love, Flip-Flops and Mokos for 14 days.

There was nowhere to go but everywhere, so just keep on rolling under the stars – Jack Kerouac.

Triglav National Park and a little bit of Austria

One of the most amazing parks in our region is Triglav national park. This is the story of very nice couple exploring it. Enjoy!